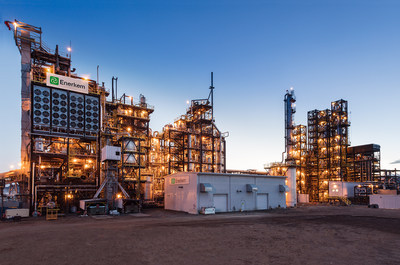 The company has been producing and selling biomethanol since 2016, prior to expanding production to include cellulosic ethanol with the installation of its methanol-to-ethanol conversion unit earlier this year.

"The commercial production of cellulosic ethanol at our facility in Edmonton marks a landmark moment for our company as well as our customers in the waste management and petrochemical sectors, and confirms our leadership in the advanced biofuels market," says Vincent Chornet, President and Chief Executive Officer of Enerkem.

This growing global market is expected to reach 124 billion liters per year by 2030 according to the International Renewable Energy Agency. "We will now progressively increase production in Edmonton, while preparing to build the next Enerkem facilities locally and around the world," adds Chornet.

Advanced biofuels play a vital role in the transition towards sustainable mobility by producing transportation fuels that replace a portion of gasoline. Enerkem's technology not only provides a clean transportation fuel, it also disrupts the traditional waste landfilling and incineration models by offering a smart alternative to communities wanting to recover waste while sustainably fueling vehicles.

About advanced biofuels
Advanced biofuels, such as cellulosic ethanol, are made from non-food sources such as residual forest biomass, agriculture waste, energy crops or urban waste. To unlock the value of non-conventional feedstock sources, these low-carbon liquid transportation fuels are produced using innovative and breakthrough technologies.

About Enerkem
Enerkem produces biofuels and renewable chemicals from waste. Its disruptive proprietary technology converts non-recyclable, non-compostable municipal solid waste into methanol, ethanol and other widely-used chemical intermediates. Headquartered in Montreal (QC), Canada, Enerkem operates a full-scale commercial facility in Alberta as well as an innovation centre in Quebec. The company is developing additional biorefinery facilities around the world, based on its modular manufacturing infrastructure. Enerkem's technology helps diversify the energy mix and make everyday products greener while offering a smart, sustainable alternative to landfilling and incineration.
www.enerkemweb.wpengine.com