MONTREAL, March 20, 2018 /CNW Telbec/ -  Enerkem Inc., a world-leading waste-to-biofuels and chemicals producer, announced today during the 255th American Chemical Society national meeting being held in New Orleans, that it had succeeded in producing a new high-performance biofuel that could improve the octane rating of fuels sold on the market and reduce their carbon footprint. 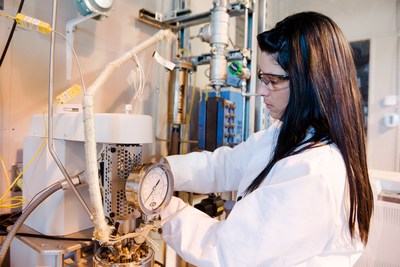 The chemical engineering expertise at Enerkem's Innovation Centre in Westbury, Quebec, allowed the company to successfully develop a process that uses its proprietary waste-to-biofuel technology to produce a new biofuel with a Research Octane Number (RON) of up to 112. This is 20 points higher than the average octane rating found in regular motor gasoline. By using bio-dimethyl ether (Bio-DME), a product derived from Enerkem's biomethanol, combined with a DME-to-high-octane-gasoline catalyst developed by the National Renewable Energy Laboratory (NREL) in the United States, the Enerkem-NREL team were the first to demonstrate at pilot scale the production of an alternative fuel rich in paraffins.

"It's a major breakthrough that could enable the development of a new non-oxygenated biofuel made from waste on a commercial scale," explained Stéphane Marie-Rose, Director of Enerkem's Innovation Centre. "Through the very selective catalytic reaction achieved using our waste-to-biofuels process, we have formed paraffinic molecules, such as triptane, whose properties already contain a high-octane rating, thereby increasing the volume of paraffins when used as an additive in a conventional fuel."

In addition to the various environmental and economic upsides, there are many possible applications for a high-octane biofuel derived from Enerkem's bio-DME. The non-oxygenated additive could serve the specialized fuels market, such as the aviation gasoline and professional motorsport sector. As with the biomethanol and advanced ethanol produced today at commercial scale by Enerkem, this new biofuel allows better combustion, replaces fossil fuels and reduces greenhouse gas emissions.

Enerkem's Innovation Centre intends to build on this technological advancement by further developing and optimizing the process as well as evaluating the potential commercial applications in the coming months.

Enerkem produces advanced biofuels and renewable chemicals from waste. Its disruptive proprietary technology converts non-recyclable, non-compostable municipal solid waste into methanol, ethanol and other widely-used chemicals. Headquartered in Montreal (QC), Canada, Enerkem operates a full-scale commercial facility in Alberta as well as an innovation centre in Quebec. Enerkem's facilities are built as prefabricated systems based on the company's modular manufacturing infrastructure that can be deployed globally. Enerkem's technology is a prime example of how a true circular economy can be achieved by diversifying the energy mix and by making everyday products greener while offering a smart, sustainable alternative to landfilling and incineration.

Sustainability and the environment are part of Enerkem’s DNA and core values. Happy to celebrate our commitment to Mother Earth through our unique disruptive technology transforming waste into renewable chemicals and biofuels.
#earthday #greenchemistry #biofuels #environment

We are proud to be part of the #1000solutions
labeled from @solarimpulse Foundation
#innovators #community which brings us new
#opportunities and #collaboration.